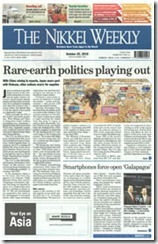 With baby boomers now reaching their mid-60s, online merchants and other Internet companies are starting to look at the silver segment in a whole new light.

Overall, Japanese in the 65-and-up age group spend some 70 trillion yen ($909 billion) a year, according to Hideo Kumano, chief economist at Dai-ichi Life Research Institute. That accounts for more than 30% of the nation’s overall consumer spending.

Not surprisingly, given the aging population, many companies are placing greater emphasis on catering to the needs of this older cohort. But baby boomers differ from previous generations in important ways, not the least of which is their higher familiarity with computers and other digital gizmos.

Add to that baby boomers’ apparent enthusiasm for spending that enriches their lives, and you have a pretty powerful consumption combination.

Living to the fullest

Today’s cyberspace-savvy seniors tend to spend more money for the purpose of finding "something to live for," according to Hiroyuki Murata, a professor at Tohoku University and an expert in businesses aimed at the elderly. These people tend to see the Net – especially social networks – as a valuable tool for collecting information and locating people who share the same interests.

Foreseeing the social networking needs of this group, DeNA Co. partnered with Club Tourism International Inc. to create a social network for middle-aged and older people back in 2007. The service lets members communicate with each other about their hobbies and interests; so far about 270,000 people have signed up.

Operators of Net shopping malls, such as Rakuten Inc., stand to be major beneficiaries of the expected growth in online spending by retirees.

Takahiro Kazahaya, a senior analyst at Deutsche Securities Inc., also sees huge growth potential in the electronic book market due to the swelling ranks of pensioners who spend a lot of time surfing the Web.

Not all trends among graying baby boomers have to do with the digital world. Another potentially important characteristic of this demographic is their keen interest in grandchildren.

When they were young, many male baby boomers were workaholics who carried Japan to rapid economic growth on their backs. They tended to leave the job of child-rearing to their wives while they toiled at the office from morning to night.

Now many feel guilty for having not spent more time with their children – and so they are trying to make up for it by playing active roles in the lives of their grandchildren. Sensing a business opportunity, Tokyo-based publisher Kirakusha Inc. has launched a magazine for such doting grandpas (and grandmas, too).

Housing-related businesses, meanwhile, are looking to capitalize on strong retiree demand for home remodeling. In a survey of elderly Japanese conducted by the Cabinet Office in fiscal 2010, only 36.4% of the respondents said their housing would be comfortable or somewhat comfortable to live in even if their physical abilities declined. 参考：日経ヴェリタス2012年1月1日～7日号