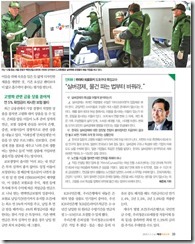 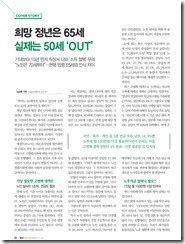 Q1. The rate of aging in Korea is found to be much steeper. It was 12% in 2012, and is expected to reach 16% in 2020, then 21% in 2026. Earlier, we did have expectations that the silver industry would be the new engine to our economy to boost the growth. There were a number of firms that have entered the market as well. However it turns out now that their performances have not satisfied market’s expectation. Please share your opinion on reasons of Korean market’s under-performance.

A1. There are some reasons for both demand and supply side in Korean senior market. As to demand side, the market size is still small. The age ratio of Korea is just 12% in 2012, while that of Japan is 25.1% in 2013. Since the total population in Korea is 5 million, senior population (age over 65) is just 0.6 million. On the other hand, senior population in Japan is 3.186 million which is 5.3 times of that in Korea.

As to the supply side, I think products and services suppliers are lack of experience of marketing to the seniors. The demand of the seniors are so diverse as they age and the nature of the market is like “an aggregate of diverse micro-markets.” Due to this nature, products and services providers need very sophisticated approach to the consumers. Even Japanese companies are struggling from the dilemma of the past success experience. However, the nature of the market is very different from the past. 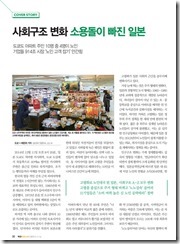 Q2.  Elder people today are much dependent on their pension schemes. They are also much less active in consumption-no matter they are wealthy or less so. How can firms encourage the elderly to open their wallets and spend more actively?

A2.  There are some possible ways. One is to stimulate “3E consumption”. Please read carefully the Chapter 9 of my book. Two is to think of promoting family tie such as grandparents and children. This is the most effective way of opening their wallets. Three is to create job opportunities for seniors. In general, seniors’ major concerns are health, wealth, and social isolation. To overcome those concerns, the best way is to continue to work to get extra revenue other than pension. While seniors do not want to spend their financial assets in the bank, they tend to spend their extra revenue.

Q3.  In your book <Impact of Senior Shift>, you adduced ‘Unicharm’ as an example of successful senior business. Can you give us some more examples of successful business in the senior market?

A3.  Curves is one of the most successful examples in Japan. It is women only fitness club chain. Although it started just 9 years ago, the number of stores is over 1,531 and the number of the membership is over 670,000 as of Dec.15, 2014. Its average age is around 60. Another example is “Raku-raku Phone” of NTT Docomo, the first senior friendly cell phone in the world. The total number of the selling is over 21 million sets.

Q4.  In your point of view, how likely is the business of ‘silver town’ to be a successful model of silver industry?

A4.  Although there were some trial to develop ‘silver town’, I do not think it will be successful. Main reason is that the concept does not work in Japan. Most trial were just imitation of CCRC, American style large scale community. Since there is cultural difference, the concept of CCRC did not meet the demand of Japanese seniors. Also, while independent seniors in the US go to CCRC, those in Japan do not go to such community as they think they want to stay at their own home while they are independent and healthy. 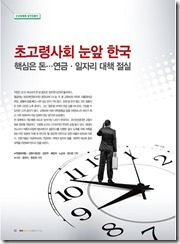 Q5.  The elderly, so called ‘seniors’ are not so accustomed with use of IT devices (at least that is true in Korea). If they are gradually to become major customers, how should marketing strategies or sales methods be changed?

A5.  You need the strategy of “Omni Channels” for senior consumers from now. In Japan, as of now, the rate of internet use of age over 65 is still not so high. However, the rate of people age below 64 is relatively higher. Also, you must know that the Internet penetration rate is the function of the time. After 10 years, even people over 70’s, majority may be the heavy users of the Internet.

Q6.  Again in your book <Impact of Senior Shift>, you suggested the importance of ‘understanding the micro market’. Could you please explain in details what you meant by ‘that’?

A6.  In the last few years, an increasing number of enterprises have been focusing on developing new products and services for older adults or for the Baby Boomer generation. In most cases, these efforts failed. The reason why that is their visions are too narrow.

Too many enterprises consider the older adult market or the Boomer generation as single homogeneous icebergs. However, in a modern economy, it is not enough to say that the Boomers represent a large part of the market just by sheer numbers. The reason is that the nature of today’s market is different from that in the past.

What are the key elements that affect the Boomers buying decisions today? The answer will be different for each Boomer, but the following five types of changes are the main influences on their decision making.

1) Physical changes due to aging

2) Changes in each individual’s life stage

3) Changes in the life stage of their family

4) Changes in their tastes based on their generation

5) Change in the time or fashion

There are, of course, other influential elements. Even so, it is easy to see how diversified the Boomers’ decision making processes are just by focusing on these five elements. Their actions as consumers will be as diverse as their decision making processes. This is because those who are in their late 50’s – the so-called “leading edge Boomers” – are more likely to be facing the five changes mentioned above than any other age group.

The impact of each influence is not the same for everyone. The importance of each factor will be different for each different product, service, or individual. The Boomers are so diversified as consumers that you can call the Boomers’ market “an aggregate of diverse micro-markets.” This is the most significant change in the nature of the Japanese Boomer’s market today since the time of high economic growth after WWII.

Q7.  Do you also have other examples of successful senior business from your own consulting cases?

Q8. There are considerable entrepreneurs who gain meaningful hints to their business from your book. Please give them advices how to not fail.

A8. Please read my book carefully and try to get more experience knowledge!