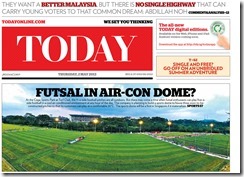 Two Australia-based providers of care for the aged — Jeta Gardens and PresCare — have agreed to collaborate in launching home-based care services here as well as in Johor Baru by next year, beefing up what some have termed as an industry still in its infancy.

Speaking to TODAY at the Ageing Asia Investment forum two weeks ago, Jeta Gardens founder Tan Choe-Lam said: “Some services may include clinical-care services and assistance with domestic chores in patients’ homes. It will be affordable to the average Singaporean.”

He said that they will focus this year on doing research on Ministry of Health (MOH) guidelines. “We feel that it’s a good market. In every Asian country, 90 per cent of the population would want home-based care.”

Experts in aged care believe that having more private players in the market will reduce reliance on governments and the burden on voluntary welfare organisations, or fill gaps here with expertise honed by a more mature market in their home countries. For instance, the market in Singapore is largely focused on helping the needy and medical needs rather than active ageing.

In Japan, private service providers have set up a system to encourage entrepreneurship among the elderly and active ageing. For example, seniors sell decorative leaves to restaurants and can track their sales monthly through a computerised system.

“The ageing population coupled with the increasing prevalence of chronic diseases is going to put a lot of pressure on the healthcare system and in acute hospitals. There are good social and economic reasons to provide care in the home — people prefer to stay at home, and it can be cheaper,” said Mr Stelvio Vido, RDNS Executive General Manager, which is still exploring the possibility of branching out in Singapore.

The MOH said there are currently more than 30 local private home-care service providers in Singapore, which “complement the VWO (voluntary welfare organisation) home-care providers in caring for home-bound patients and also provide home-help services for patients with varying degrees of mobility”.

It has convened an industry-led committee to develop strategies for effective health and social home-care delivery, “including articulating common standards of home care and identifying new home-care services that can be developed to meet unfulfilled needs today”.

While foreign players agree that there is significant demand in Singapore, with the population ageing, the high land costs, limited economies of scale and lack of universal financing or insurance for aged care make it challenging to establish a presence here.

For example, those who wish to set up retirement villages — comprising living and recreational quarters as well as medical facilities — cite the costly and limited land here. Some also point out the availability of domestic helpers, which could limit demand.

“Also, if the Government is not involved, if there are no public-private partnerships, the risk is higher for private operators as the gestation period is about three years,” said Mr Tan of Jeta Gardens.

Still, by pooling resources with another service provider — such as an existing base in Malaysia — Jeta hopes to be able to generate enough economies of scale to set up successfully in Singapore.

Meanwhile, provider WaterBrook Lifestyle Resorts, which builds retirement villages for the middle income and above, is setting up a retirement resort in Iskandar, Malaysia, and aims for “60 per cent of its customers to be Singaporean”.

“Once we get it going in Iskandar, the next step is to talk to the Government here, after they have seen what we do. We believe this is a new product for Asia, where aged-care facilities have typically been not for profit,” said WaterBrook Managing Director Kevin Ryan. His company provides more upmarket services and facilities such as cinemas, art and craft studios, and libraries.

Tohoku University Professor Hiroyuki Murata, who is Chief Executive Officer of the Centre for Studies on Ageing Societies in Japan, pointed to the model of long-term care insurance and the public-private model, used in Japan, Germany, Holland and South Korea.

In Japan, users pay only 10 per cent of fees, even when they go to private providers, with the rest covered by insurance. From age 40, everyone has to pay for compulsory long-term care insurance every month; the rates differ with the young paying more.

“This will reduce reliance on government reimbursables. The fee is set based on care value, and with any additional subsidies, the operator needs to provide extra services.

“It also reduces excessive reliance on governments as they do not step in so much to provide infrastructure,” said Prof Murata.

In September last year, the Government called a tender for a residential site in Jalan Jurong Kechil, which also came with the option for the development of a retirement village,

The tender was ultimately won by a developer with a track record of building private developments. However, Ms Chia said that developers are still keen to know if more plots of land would be released for building retirement villages. She added that there could be more support from the Government, noting that the Hong Kong government for instance, parcelled out the first site for such a village for a dollar, but with the caveat that the cost of the units stay at a specific rate.

Prof Murata felt a day-care centre model is still best and suggested there be one to support every four or five Housing and Development Board blocks.

Mr Tan, however, still believes a retirement village is essential. “The direction of the day-care centre is right but, unfortunately, 90 per cent who depend on day care will need 24/7 care soon,” he said.