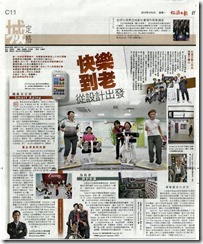 Age with joy – Starting from design

In the new 2013-14 Budget, Financial Secretary Mr John C Tsang mentioned that the government has to follow the footsteps of foreign countries, set up Special Committees concerning the problem of aging population. Reports in 2011 show Japanese women are no longer the longest-living people on earth, instead, Hong Kong’s female ranked top, spelling intensifying population problems. To alter the negative impression that comes with ‘Aging’, the Budget is not sufficient. Should design improve life, it should also be able to change people’s attitude of life. For the topic of ‘Aging’, how far could design bring us to?

According to the statistics released by the Hong Kong Census and Statistics Department, Hong Kong population is expected to increase to 8.47 Million in 2041. The ratio of residents aging 65 or above will also increase to 30% of the total population by that time. The average lifespan of Hong Kong women was already 86.7 in 2011, it is expected to rise to 90.8 in 2041. Various statistics show, Hong Kong is after many more developed countries, facing serious aging population problems. Japan, being an expert country in solving the problem of aging population, apart from the formulating of strategic policies by the government, society also views the elderly market as an important one, prevalent corresponding service and products are visible.

Prof. Hiroyuki Murata from Tohoku University’s The Smart Ageing International Research Center (SAIRC) advocated the concept of Smart Aging in 2006. He explained that aging has always been seen negatively as ‘loss’ or ‘deterioration’. He also explained “At the same time, there is the concept of Anti-aging, which presumes aging as ‘illness’ or ‘unattractiveness’. Anti-aging worshippers are obsessed with being young; on the contrary, Smart Aging poses a completely different attitude. First of all, We believe challenges that come with aging are opportunities. With these opportunities, people become smarter and more mature. Besides, aging is beneficial to human beings. Thirdly, aging is an inevitable stage in human development.”

Products with modern style is essential

Belief determines attitude. Anti-aging worshippers are often fans of ‘Botox Injection’ and ‘Skin Firming Treatments’, while Smart Aging followers do not fret on getting old, instead, they take aging easy. Taking things easy do not mean giving up, stopping to take care of themselves. Prof. Murata has founded a social enterprise and collaborated with various companies in designing elderly service and products. Curves Japan is one of the best known examples. Originated from the U.S., Curves is a fitness activity for women. Prof. Murata brought Curves to Japan, adapting to local Japanese older women’s needs, women therefore could exercise with Curves. Until 2011, there were already 941 Curves Japan centres in Japan, serving older women in small local communities. This fitness sport advocates ‘3M’, No Mirror, No Make-up and no Man, allowing women to exercise freely in a relaxing environment. Besides, fitness moves are designed specifically for women, every exercise lasts for 30 minutes.

The reason why Prof. Murata has been working actively on innovating new elderly service and products is, he believes that only depending on the government will not solve the problem of aging population completely. Besides, having discovered the huge market potential in elderly population, he believes it is worthwhile that social enterprises and the commercial sector deploy more resources into innovations. He assisted NTTDoCoMo, a Japanese telecommunications company, to design Raku-Raku smartphone for the elderly. “If we take mobile phones as an example, we have to make adjustments according to the needs of elderly people and take their needs as design directions. Also, the appearance and modernity of mobile phones are important. Having a sense of fashion reduces the feeling of being old. However, most young product designers always neglect this point.” He said.